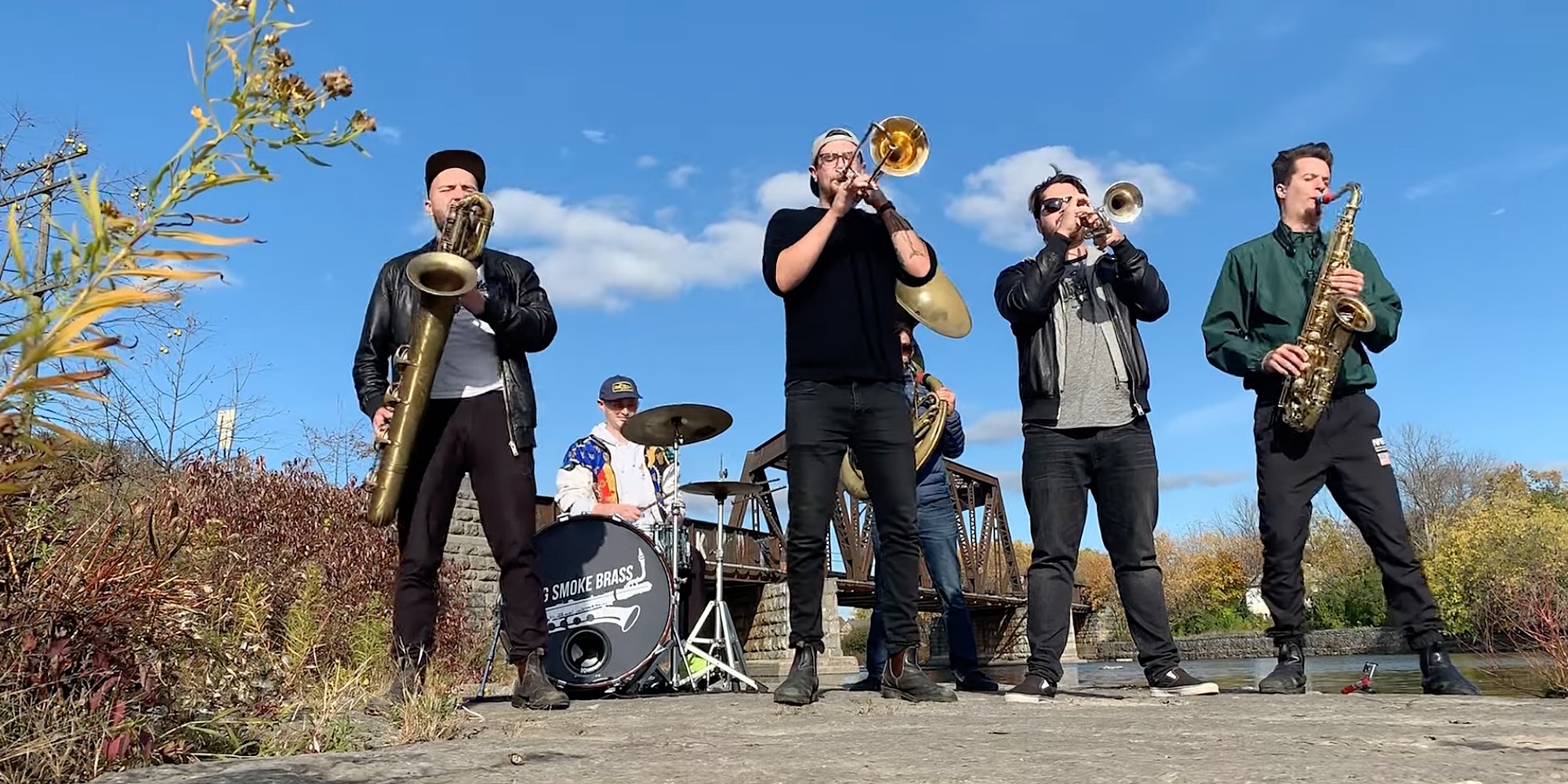 A heavy-hitting brass band playing Top 40 hits to the classics. From the streets of Toronto to a waterfront concert at the Windermere Wharf.

Born on the streets of Toronto in 2017, Big Smoke Brass is a leading voice in the Canadian brass scene. Dedicated to fostering community and connecting people through their high-energy music, the band has given hundreds of performances, successfully completed a crowdfunding campaign, toured Eastern Canada, and released a variety of original music and videos. Wherever you may be, Big Smoke Brass is determined to share their love of music with you.

Big Smoke Brass has firmly established itself as a leading voice in the Canadian brass band landscape since its inception in the summer of 2017. The band got its start playing on the streets of Toronto, and quickly garnered a strong following thanks to its ear-catching sound and strong group dynamic.

The band released their first EP, “No Breaks” in May 2018, with a subsequent tour of Canada’s East Coast later that year culminating in a headlining performance at the Pocologan Camp Party 2018. 2018 also marked several major milestones for the band, including a featured performance at TEDxToronto 2018, an opening set in support of NYC’s The Lucky Chops, and the filming of the band’s first music video; a cover of The Jacksons’ “Blame It on the Boogie.”

2019 saw the release of Big Smoke Brass’s second music video (a cover of Ariana Grande’s “Thank U, Next”). The band was also featured at the TD Toronto Jazz Festival and Canadian Music Week, and performed alongside France’s Ceux Qui Marche Debout.

In 2020, the band opened once again for The Lucky Chops, was featured on the new TVOKids program “Backyard Beats”, and performed for the TD Niagara Jazz Festival Online Summer Mardi Gras. 2020 also saw the band complete a “Parks Tour” of Toronto, bringing live music back safely to outdoor spaces in the first Summer of the Covid-19 pandemic.

After successfully exceeding a fundraising goal of $15,000 and recording at the Bathouse Recording Studio with Juno award-winning engineer Nyles Spencer in November of 2019, Big Smoke Brass released their debut album “From a Block Away” in June of 2021. The band also had a featured appearance at the 2021 Prince Edward County Jazz Festival.

In endeavouring to spread positivity wherever they go, Big Smoke Brass continues to foster a sense of community with their listeners while helping to spread their music through educational outreach. The band can still be found performing on the streets of Toronto in the Summer, as well as maintaining a busy schedule of shows & events throughout the year.