We’re doing our best to bring more warmth to Muskoka!  Our lovely, spirited Tamar is coming back & bringing mega guitarist Matt Sellick with her for an evening of Spanish music, song & dance!

TAMAR ILANA – Her voice is as fierce and powerful as it is delicate and ornamental, and she is as comfortable with heart-wrenching flamenco cante in Spanish as she is with Sephardic love songs, or singing playful Balkan party tunes.  An in-demand dancer, Tamar began her study of flamenco dance at the age of eight, with Esmeralda Enrique in Toronto, and has been immersed in the world of flamenco ever since. “Flamenco is everything,” says Tamar. “It is sorrow, it is happiness, it is love, it is death. It is every emotion you could possibly feel all together.” The daughter of famed ethnomusicologist & performer, Dr. Judith Cohen, she grew up steeped in the folk traditions of Spain, Portugal, the Middle East & the Balkans. She moved to Seville, Spain to study full-time at the at the prestigious Fundación Escuela de Arte Flamenco. When away from Canada, she divides her time between France & Spain & touring. With her group Ventanas, she has been nominated for Canadian Folk Music Awards as “Best Traditional Singer, Best Ensemble, Best World Music Group” and a Juno Award. She has toured with the Juno-nominated Balkan klezmer band Lemon Bucket Orkestra, performed with Afro-Brazilian ensemble Maracatu Baque de Bamba, the Esmeralda Enrique Spanish Dance Company, the Jorge Miguel Flamenco Ensemble and others. She is also a talented actress and has performed at La Mama Theatre in New York, the Enwave Theatre in Toronto and the Shakespeare Theatre Company in Washington, DC. With the troupe Counting Sheep, she performed at the famed Edinburgh Fringe Festival in 2016, which won the coveted Summerhall Award (the gold ram’s head).

MATT SELLICK is a flamenco guitarist, composer, and recording artist who takes a unique approach to traditional flamenco and instrumental music. He has studied flamenco in Spain with some of the world’s greatest flamenco guitarists. Matt has been a featured soloist with the Thunder Bay Symphony Orchestra and Consortium Aurora Borealis, played in the band of Canadian guitarist Jesse Cook, and accompanied the Esmeralda Enrique Spanish Dance Company “He obviously has a great feel for flamenco, an outstanding technique – and plays with a warm rich sound and lovely range of tone colour and shading. Sellick is clearly a huge talent.” – Terry Robbins in The WholeNote. 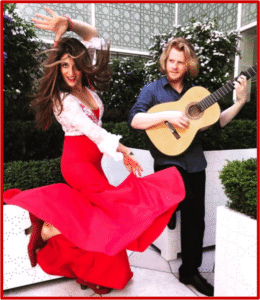