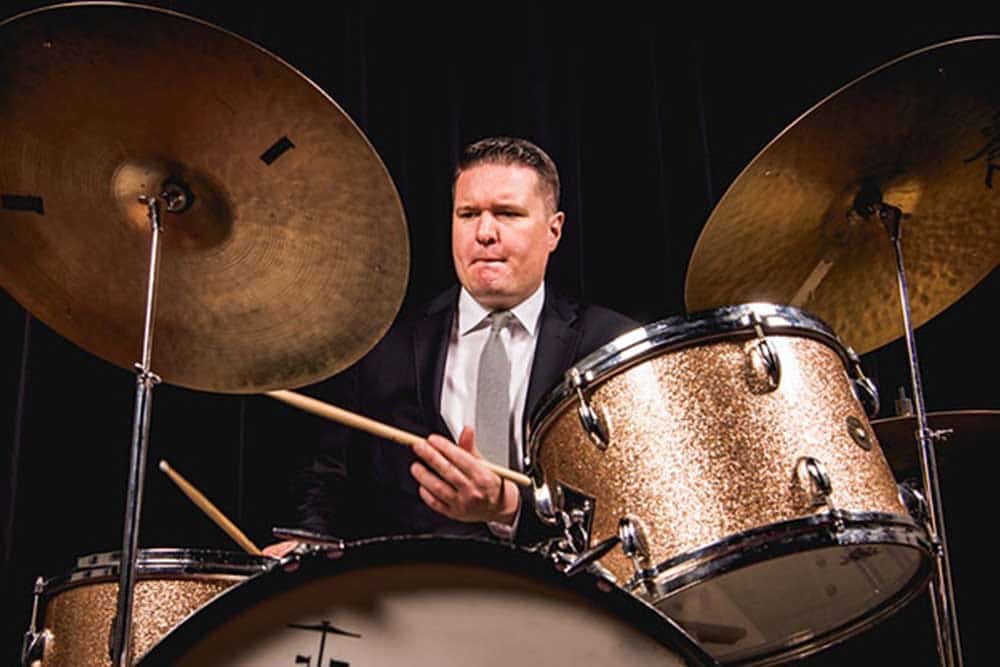 For this special outdoor performance the group has chosen repertoire to reflect the idyllic surroundings, with a theme of Summer on Lake.

Comprised of four of Toronto’s finest jazz instrumentalists, The Morgan Childs Quartet plays a specially selected program of jazz standards in a modern yet approachable style. Rooted in the tradition of classic straight-ahead jazz recorded for classic record labels like Blue Note, Prestige, and Verve, the quartet draws upon their shared inspiration as frequent collaborators and close friends to create a program of music sure to appeal to any music lover! For this special outdoor performance at Muskoka Chautauqua, the group has chosen repertoire to reflect the idyllic surroundings, with a running theme of Summer on the Lake.

BC native Morgan Childs has established himself as a first-call drummer for many leading Canadian and international jazz artists. Morgan has four recordings to his name as a leader, including 2016 release On The Street of Dreams, which was chosen by the Ottawa Citizen as one of the top-10 Canadian jazz records of 2016. Awards to his credit include three consecutive CBC Galaxie Rising Star Awards in 2006/07/08 with three different groups, as well as the 2009 and 2012 Grand Prix du Jazz at the Montreal Jazz Festival, with the Amanda Tosoff Quartet and Robi Botos Trio, respectively. Other notable artists Morgan has performed and recorded with include Zach Brock (Snarky Puppy), Phil Dwyer, Kelly Jefferson, Bernie Senensky, Eric Alexander, Ingrid and Christine Jensen, Ian Hendrickson-Smith (The Roots), Kirk MacDonald, and Pat Labarbera. In 2016, Morgan was awarded a Chalmers Prize from the Ontario Arts Council, and a grant from the Canada Council For the Arts, to study privately in New York City with jazz legends Billy Hart, Kenny Washington, and Jimmy Cobb. The culmination of his experience results in a distinctive, energetic, and musical approach to the drums that is steeped in the bebop tradition of his mentors, yet is forward-looking and diverse enough for the most contemporary of jazz artists. Morgan has appeared on stages across Canada and around the world, including tours of the US, Mexico, England, Ukraine, and India. His latest release is the co-led “Donnybrook: Live At The Bassment”.

Toronto-based Chris Gale is a saxophonist, composer, and educator, whose driving style and rich tone can be heard on hundreds of recordings. Chris spent several years as a full-time touring member of the Bushwack Horns with legendary Canadian roots-rock band Blue Rodeo, and has toured and recorded extensively with other legends of the blues scene like Colin James, Jeff Healy, and the Powder Blues Band. Chris is a member of alt-jazz group The Worst Pop Band Ever, and currently leads the organ group Hector, with whom he has released a full length album called Uncharted. Gale is a pillar of the jazz scene at Toronto’s legendary Rex Hotel, and can be found there hosting the Tuesday Night Jam Session, as well as appearing weekly with Peter Hill, Laura Hubert, Bob Brough, Morgan Childs Soul Jazz Revue, and many others. His robust sound and swinging approach has been likened to the great saxophonists of the Golden Age of jazz, like Ben Webster, Coleman Hawkins, and Hank Mobley. Former Globe and Mail jazz critic Mark Miller calls him “among Toronto’s finest… in the service of a distinctive style that is timelessly melodic, yet distinctively modern.”

Ben Bishop favours a freewheeling, bop-based guitar style, most reminiscent of the classic guitarists of the 1950s and 1960s. Players such as Kenny Burrell, Wes Montgomery, and Grant Green are major inspirations to his sound and musical approach. After a number of years living in New York, during which he earned a DMA in Jazz Studies from the prestigious Eastman School of Music, he currently resides in Toronto, Canada. He regularly performs with many of the city’s finest jazz musicians and is also active as an educator.

As of late, the co-led organ trio known as Donnybrook has been a primary musical outlet for Ben. The trio, consisting of Bishop’s guitar, Jeff McLeod’s Hammond organ, and Morgan Childs’ drums, has a critically-acclaimed recent release on the Bandcamp platform: Donnybrook – Live at the Bassment. Other career highlights include an acclaimed big band residency with Ryan Truesdell’s Gil Evans Project at the Umbria Jazz Festival in Perugia, Italy, and a 2009 DownBeat Jazz Award with Dave Rivello’s New Jazz Ensemble. In addition, Bishop has shared the stage with musicians including Alex Dean, Maureen Kennedy, John Riley, Perry White, Bernie Senensky, Phil Woods, Helen Merrill, Pat LaBarbera, Neil Swainson, Lee Konitz, Steve Wallace, and many others.

Bassist Jonathan Meyer, born and raised in Toronto, has been a fixture of the jazz scene since his graduation from the music program at Humber College. Jon has performed, recorded, and toured with artists such as Peter Appleyard, Tony “Oulabula” Bazley, Ned Goold, Pat Labarbera, Michael Kaeshammer, Bill Murray, Mary Margaret O’Hara, Norman Marshall Villeneuve and David Virelles, to name a few. Jon has played on numerous film and television soundtracks, as well as dozens of albums on both upright and electric bass. In non-pandemic times, he is a regular fixture at renowned Toronto jazz clubs like The Rex Hotel, The Reservoir Lounge, Reposado, The Jazz Bistro, and the Emmet Ray. Jon has toured Canada and Europe extensively with Friendly Rich, Trevor Giancola, Morgan Childs, and many more.